Closing Alert from for duration of the governor’s stay-at-home order.

In line with the decisions made in our community to minimize the spread of COVID-19, the Moline Public Library is closed through the end of April.

The health and safety of our library patrons and staff is our biggest concern and the decision to close was made in accordance with the local, state, and national recommendations.

All items currently checked out will have their due date extended to May 1. No late fees will be assessed during our closure. If you wish to return items before then, the drive up book return will be available.

Moline cardholders whose accounts are set to expire in March and April will have their expiration dates extended.

Due to the suspension of delivery services between libraries, cardholders will not be able to place holds in the PrairieCat Catalog at this time. Patrons with any current pending holds will be handled after that service resumes. Holds that have arrived, but have not been picked up, will be available when the library reopens.

We invite you to visit our web site frequently for updates and to use many of our online services with your Moline Public Library Card:

Many of these services can also accessed by downloading our app MPLToGo.

Beginning Thursday, April 2 the Library’s Information and Reference desk will be available to answer questions by phone. This service will be available Monday through Friday, from 9am to 3pm. Please be aware that, due to limited resources and staff, responses to more complex or in depth questions may take up to 48 hours.

Updates on library services will continue to be sent through our social media outlets.

If you missed this best seller a few years back when it was new, now is the time to pick it up and read it – before Ron Howard comes out with the movie version.

If you didn’t miss it and loved it, well, then this is for you. 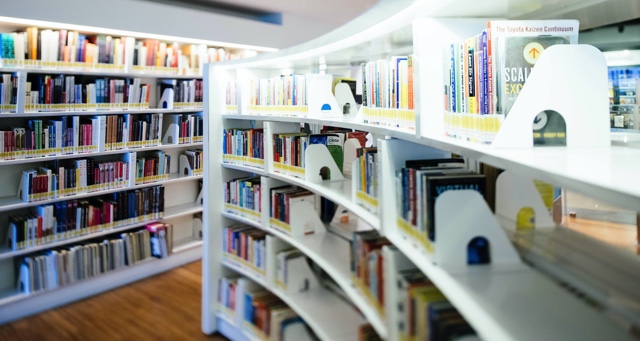 It’s not unusual for the sight of library books in a dumpster to throw the public into a tizzy. The reality is, however, that this is part of the natural life cycle of a library book. Whether the book is beyond repair or simply outdated, the dumpster is often—though not always—the final resting place for library books. If a book is recycled instead of straight trashed, there’s always the possibility it will return as a new book, reincarnated. It’s the circle of life. A new chapter. The turning of the page.

But let’s go back to the beginning. If you’ve never thought much about it, you might now be wondering what is the life cycle of a library book? Where do they come from?

Find out (and read the rest of the article) at BookRiot.

This class will be repeated on April 1st.

In addition to print and audio copies of the book being available from PrairieCat libraries, Moline Public Library patrons can check out a limited number of copies on hold at the library’s information desk or can checkout an e-copy of this title via Overdrive.

Space is limited and registration is required.

Spend your noon hour with us listening to Reggie Harris, musician and storyteller.  Bring your brown bag lunch or stop in the Java Lab Cafe before this performance provided as part of the Quad City Arts Visiting Artist series.

Find your next job and further your career! Join us for an Illinois Department of Employment Security Job Fair featuring employers who are currently hiring. Please come prepared dressed to interview and have copies of your resume available.

Employers scheduled to attend include:

The ARC of the Quad Cities

State of Illinois, Department of Corrections

In honor of the 100th anniversary of the 19th Amendment, Laura Keyes will portray Elizabeth Cady Stanton, renowned suffragist. Laura picks up Stanton’s story following the Civil War in 1866, focusing on her involvement with women’s suffrage in that era.

For more information on Laura Keyes and her portrayal of historic women, please visit https://www.laurafkeyes.com/characters.htm

Inside Out: Escape from Pretoria Prison by Tim Jenkin

Movie: Escape from Pretoria
When it comes out: March 6
What the book is about: The thrilling story of Tim Jenkin’s daring escape from Pretoria Maximum Security Prison, where he was kept by apartheid authorities for his activities on behalf of the ANC, and his subsequent flight from South Africa.

The Retreat from Moscow by William Nicholson

Movie: Hope Gap
When it comes out: March 6
What the book is about: Edward and Alice have been married for thirty-three years. He is a teacher at a boys school, perfectly at home with his daily crossword and lately engrossed in reading about Napoleon’s costly invasion of Moscow. She is an observant Catholic, exacting and opinionated, and has been collecting poems about lost love for a new anthology. Jamie, their diffident thirty-two year old son, is visiting for the weekend when Edward announces he has met another woman.

The Half Life by Jonathan Raymond

Movie: First Cow
When it comes out: March 6
What the book is about: When Cookie Figowitz, the cook for a party of volatile fur trappers trekking through the Oregon Territory in the 1820s, joins up with the refugee Henry Brown, the two begin a wild ride that takes them from the virgin territory of the West all the way to China and back again. One hundred and sixty years later, Tina Plank, an unhappy teenager, meets Trixie, a girl with a troubled past, and the two become fast friends. But when two skeletons are accidentally unearthed from their common ground, the lives of Tina and Trixie, Cookie and Henry are brought together in unexpected and startling ways.

Movie: Spenser Confidential
When it comes out: March 6
What the book is about: Henry Cimoli and Spenser have been friends for years, yet the old boxing trainer has never asked the private eye for a favor. Until now. A heavy-handed developer is trying to buy up Henry’s condo on Revere Beach and sends thugs to move the process along. Soon Spenser and his apprentice, Zebulon Sixkill, find a trail leading to a mysterious and beautiful woman, a megalomaniacal Las Vegas kingpin, and plans to turn to a chunk of land north of Boston into a sprawling casino. Bitter rivals emerge, alliances turn, and the uglier pieces of the Boston political machine look to put an end to Spenser’s investigation. Aspiration, greed, and twisted dreams all focus on the old Wonderland dog track where the famous amusement park once fronted the ocean. For Spenser and Z, this simple favor to Henry will become the fight of their lives.

Movie: The Burnt Orange Heresy
When it comes out: March 6
What the book is about: Fast-talking, backstabbing, womanizing art critic Jacques Figueras will do anything – blackmail, burglary, fencing, assassination – to further his career. Crossing the art world with the underworld, Willeford expands his noir palette to include hues of sunny Florida and weird tints of Surrealism when Figueras takes a job for an art collector who doesn’t care how his art is collected, even if it involves murder.

Movie: Bloodshot
When it comes out: March 13
What the book is about: Your name is Angelo Mortalli. Your brother is trapped behind enemy lines and on the verge of – no. That’s not right. Your name is Raymond Garrison. You’ve retired from the dangers of the field, but a desperate plea from your oldest friend plunges you into a vicious firefight that – no. That’s not right, either. You are Bloodshot. You are the shade of gray that freedom requires. The perfect confluence of military necessity and cutting-edge technology. A walking WikiLeaks. A reservoir of dirty secrets that could set the world on fire. And you’ve just been captured!

Movie: Tuscaloosa
When it comes out: March 13
What the book is about: In a sensitive and sensual coming-of-age story, Phillips offers a poignant critique of the Southern novel genre, in which he questions the very foundations of his society–one that condemns women who take blacks or other women as lovers while rewarding the men who commit these women to mental institutions, abort their babies, and drive them to violent death.

Movie: The Informer
When it comes out: March 13
What the book is about: Piet Hoffman, a top secret operative for the Swedish police, is about to embark on his most dangerous assignment yet: after years spent infiltrating the Polish mafia, he’s become a key player in their attempt to take over amphetamine distribution inside Sweden’s prisons. To stop them from succeeding, he will have to go deep cover, posing as a prisoner inside the country’s most notorious jail.